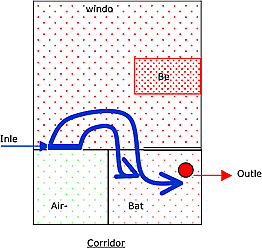 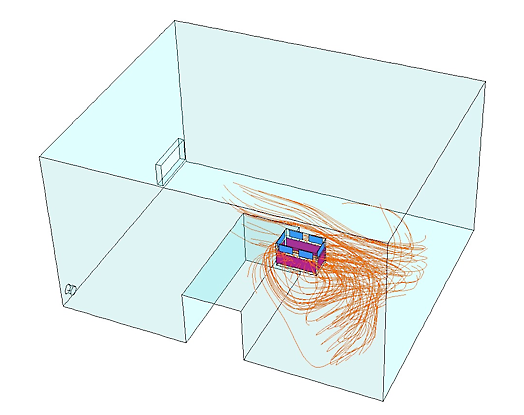 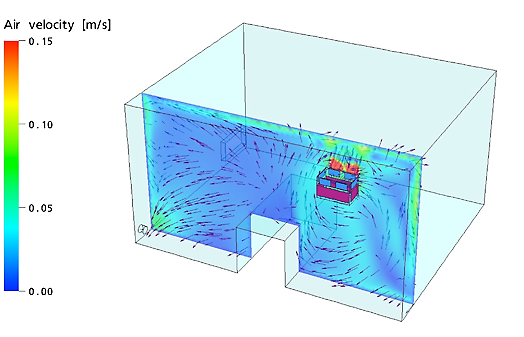 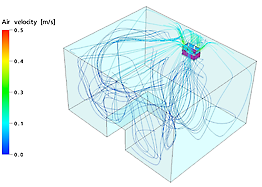 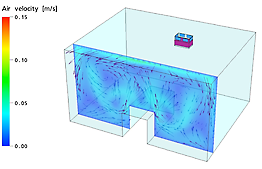 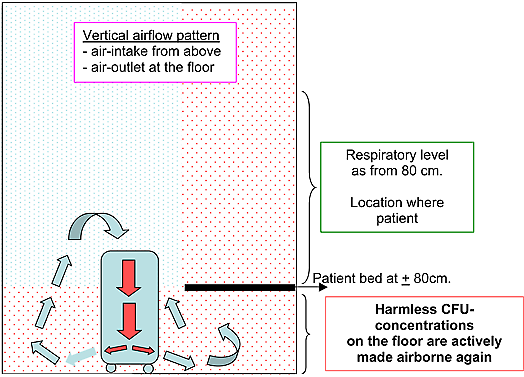 Why do you have 3 filter systems in your filter cartridge?
Pollution in the air consists of only 2 things: particles and gases. There is nothing else. So, by eliminating 2 as much as possible, one has an efficient air cleaning device. For the particles, MedicCleanAir® has the most effective HEPA level (level 14) and ULPA 15 level, and for the gases the activated carbon. The pre-filter F9 is only integrated as a protection for the activated carbon filter.

Why not integrate these 3 filter types separately ? Why putting or joining them all together in one filter cartridge?
By putting them together in a special way, MedicCleanAir® obtained the highest efficiency possible. Additionally, by separating the 3 different mediums, maintenance would be costly. One could be required to change pre-filter after 7 months, the activated carbon filter after 10 months, the HEPA or ULPA filter after 1.3 years. This would create an enormous maintenance cost.

Bacteria
Bacteria in general need to have a basis of nutrition together with an ideal breeding ground in order to survive. In other words: bacteria on themselves cannot survive on an active basis without its nutrient basics, the ideal temperature and humidity needed for that specific bacterium. Nutrient basics can be water, “white of eggs”, etc. As long as the bacteria can feed itself with its nutrient, it can continue to exist, grow and/or multiply itself, be active.
The basic, or possibly the nutrition itself can be airborne through e.g. particle, droplets, or even human tissue. (E.g. TBC, pox, measles) When, trough air purification, the basic and the bacteria specie are being captured, held and kept in the filter cartridge, the bacteria specie will stay ‘alive’ until all nutrients are being consumed (and no other nutrients are being proposed to that specific bacterium). Also the perfect ‘breeding ground’ (= temperature, humidity …) is needed to keep bacteria active. When this perfect breeding ground fails to exists, when the bacteria species run out of nutrition, when temperature or humidity are not ideal, they die. A small number of them however may continue to ‘live’ in ‘sleeping circumstances’, they are in a non-active condition. However, major requirement for this ‘sleeping condition’ is that the ideal breeding ground (temp./humidity, etc) is kept. If that is not the case, they will die as well.

Viruses
Viruses are intracellular species; meaning that they cannot exist out of the environment of a cellule or cluster of cellules. The virus needs the cellule(s) for its nutrition, its survival, together with – as said for bacteria – the perfect breeding ground – temperature, humidity etc. They can only survive when multiple cellules are being presented to the virus itself. A virus cannot multiply itself without the availability of cellules. As soon as the virus runs out of its nutrient, it dies.
Cellules and their accompanied viruses, when transported through the air, are being absorbed by the MedicCleanAir® filter cartridges. The viruses will stay ‘alive’ until all nutrition from the cellules or cellule clusters has been ‘consumed’. Consequently, they will die after that.

Time lap during which bacteria and viruses will remain active
The exact time lap in which bacteria species and viruses can remain alive or in ‘sleeping condition’ is difficult to determine. It depends on which and how much nutrition that specific bacteria specie or virus has at its disposal at that specific time. Consequently, one can state that the same species, airborne with a cluster of e.g. water droplets will remain longer ‘alive’ as another specie of the same type, airborne with a smaller number of e.g. water droplets.
It is therefore impossible to determine how long a specific specie will remain alive within the filter cartridge.
All specialists however are determined that the time of survival for either bacteria species or viruses without any nutrients is between several hours and few days. Survival during several months or years is practically 100% excluded. Nevertheless bacteria spores in ‘sleeping conditions’ are the oldest life form on earth and no exact data is available on how long these might be able to stay in their ‘sleeping condition’.
However, the efficiency of the MedicCleanAir® filter cartridges secures the capturing of bacteria and viruses at all times.

Fungi/Aspergillus
Fungi are specie which is a life form on itself. It grows without the need of a basic nutrient. It grows – multiplies when living in the correct temperature and humidity. Some are more active than others whenever in ideal situations. They are sized between 2 and 10 microns and are transported through the air without any means of a ‘transport/carriers’. Aspergillus is found everywhere; in normal houses, outside in open air, in office buildings, in hospitals, on floors, walls, ceilings, in HVAC-systems, heaters, furniture, in dust, etc. Healthy people exposed to these fungi, do not experience any difficulty or health problems. However, immune compromised patients (which have an immune deficiency) can die from being exposed to fungi (I.A. Patients). It is therefore that optimum air cleaning in patient rooms is of utmost importance.
Further info and different kinds of fungi can be found on:
http://www.aspergillus.man.ac.uk

Conclusion
The efficiency, capturing or break-through of pollutants is not to be discussed for particles of size of 0.3 microns and bigger. The results are 100% positive, 100% adsorption.
As far as the carriers of bacteria and viruses smaller than 0.3 microns are concerned the MedicCleanAir® Mobile HEPA Units have an efficiency of over 99% adsorption capability as shown multiple medical tests – see test results medical –

Where do we have to change the filters cartridges?
In the basement of the hospital or outside the hospital. The maintenance or changes of filter cartridges are never to be done within the area of use. But, these instructions are also mentioned in the manual which accompanies each unit.

Does MedicCleanAir® have other types of filters?
Yes, see products 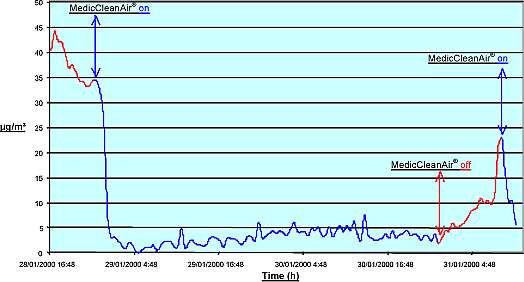 A. Air flow inside the room created by the MedicCleanAir® air purification unit 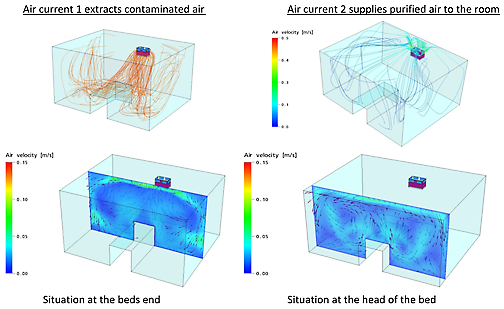 B. Air flow of the air inside the room in relation to the adjacent area.

Picture below: air is extracted at the left corner (bottom floor) + air is being purified by the MedicCleanAir® air purification unit installed against the wall, near the patients bed. 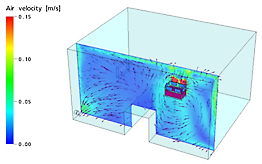 4.1. Negative pressure rooms are rooms with less air inside the room. The air flow in relation to adjacent areas will be from outside the room towards the inside of the room.

The amount of air that needs to be extracted or supplied to a normal patient room (5x4x2.6 meters) needs to be 100 to 150 m3/hour difference between extraction and supply.

5. Pressure difference itself (negative or positive)

What are leakages that make the creation of pressure difference impossible:
Leakages are openings between the room and adjacent areas where air can float freely. E.g. windows that are not closing well, doors where air can float freely underneath, centralized HVAC-systems that supply cool or heated air, stand alone AC’s with connection to the outside, light fixtures that have openings towards false ceilings, etc.

Comparison:
We blow air into a new balloon. The balloon will have positive pressure inside. Then, we make a hole in the balloon and air will escape through that hole (air flow will be from inside to outside and will continue to be as this as long as air is being pumped inside the balloon – continue to blow the balloon). As a result of the hole, air pressure (the positive pressure inside the balloon) will drop to zero as all air will escape through the hole.
The same counts for rooms where air is being sucked out of (negative pressure rooms). As long as there are no leakages (holes) in that room, pressure difference will be achieved. As soon as leakages occur (holes), pressure difference will not be obtained or if obtained, will fall to zero.

Misunderstanding:
Stating that by increasing the amount of air being pumped inside / or sucked out of a room, one will solve the problem of leakages (holes) inside a room is not correct. As air always goes the easiest way (through holes), enormous ventilation systems with enormous air quantities will be needed to create pressure difference in rooms that are not sealed off well. Additionally in those circumstances, air flow will be very high (≥ 0.2 m/s) and thus influence the comfort (noise and wind draft) of the patient inside the room.

Conclusion:
Isolation rooms (negative or positive) are based on two factors:

One may not simply state that an isolation room is worthless when pressure difference cannot be built up due to leakages. Air quality inside the room can be perfect and the air flow of the air inside the room in relation to the adjacent areas can be correct as well. Thus, isolating patients and protecting hospital staff and visitors in the best way possible. Nevertheless, when rooms are sealed of good, pressure differences of as high as 20 Pascal can be achieved.

«With the recent outbreak of the deadly Corona virus, it is extremely important for hospitals with isolated infected patients to keep the air in their environment safe and clean. Here is a small appearance of one of our air purification systems reported in the Belgian press this week.»